On 11 January 2018, at 16h09, my worst nightmare as a pet owner happened. Excruciating heat led to my decision to take the dogs to swim at Muizenberg Beach, a decision I would later regret.

Bumper-to-bumper traffic, unbearable heat and impatient dogs resulted in my decision to turn off and park on the side of the road before the river instead of going further and parking at the “dog beach”.

I gave the dogs a treat after closing the windows further so that the air con would keep the car cooler while we sat in heavily congested traffic. I parked the car and walked around to open the passenger door for the dogs. Hearing a noise up ahead, I looked up and saw a black dog run in front of a white bakkie and into some bushes. I remember thinking “that poor dog” before turning to open the door for my dogs.

And then I realised: that black dog was my baby.

Not a single sighting

After double-checking in the car as I couldn’t believe Ziggy wasn’t there, Star and I sprinted towards where I’d seen him run into the bushes. I felt frantic, unsure, and could barely contain the tears that were already streaming down my face.

Passengers in a car told me he’d run onto the beach, so I followed their directions and met up with a couple who’d seen Ziggy running. The kind husband ran with me for over an hour, following the directions from people on the beach.

With not a single sighting and in the overwhelming heat, we were forced to turn back.

I reached the car and phoned Ou Kaapse Vet to report Ziggy missing. They were incredibly helpful and gave me the contact details of Jess O’Kelly from Aid for Animals in Distress. Jess was amazing, organising a search party and posting on Facebook so I could go home and recharge with Star before heading out again.

Many responses came through, and a kind Samaritan from Muizenberg offered to come out and search with me as the area was not safe. We walked the beach, calling and whistling, with no results. After 10 PM, we called it a night. Defeated and miserable, I went home to attempt to sleep.

The following morning I was at the beach before sunrise. Star and I walked the beach from Sunrise Circle to Strandfontein, but there was no sign of my baby boy. After dropping Star off at home and printing posters, a friend accompanied me and we handed out flyers and put posters up around the beaches. Despite searching for hours over the weekend, on Sunday night there was still no sign of Ziggy and I had to go to work on Monday morning.

Many posts went out and a Help Find Ziggy page was created. Star and I spent every afternoon of the first week searching the dunes and beach area.

On Monday, 22 January 2018, I arranged to have a drone fly over the area to see if we could spot him that way. I really felt sure I would be taking Ziggy home that night and was devastated when, after over two hours of searching, there was no sign of him. On 28 January, another post was shared to many groups, reaching 31,181 people.

By the beginning of February, Star was pining terribly and had stopped eating and playing. She even refused vienna sausages, her favourite food. It was like I had not just lost Ziggy, but Star as well, even though she was still with me.

Hilary Russell Gunn, who runs Hout Bay PETS (Pro-Active Education, Treatment & Sterilisation) and from whom I’d adopted Ziggy, met me with Princess, a foster dog. Princess was 10 months old, covered in mange and needing some love. Princess helped to bring Star out of her depression and eased my constant worry about Star.

Over the next six weeks, I followed every lead that was sent my way. But, despite many people looking for him and sharing his posts, there was still not a single sighting of Ziggy. I posted on many Facebook pages, went regularly to the animal welfares to check if he’d been handed in, and continued to contact law enforcement and security within 20kms of Baden Powell Drive, where he’d gone missing.

On 1 March 2018, it seemed like there was a breakthrough. A dog matching Ziggy’s description had been seen running in Lakeside. I dropped what I was doing and Star, Princess and I went to follow that lead. Disappointingly, it turned out to be a dog that lives on Boyes Drive and often escapes its garden.

Over the next few weeks, many sightings were reported but none could be confirmed. Every time I went out to follow a lead, it was either the dog from Boyes Drive or there was no dog found. Many people contacted me during this time and I kept getting my hopes up, only to have them dashed when it turned out not to be Ziggy. There are an unbelievable number of black-tan-and-white dogs out there!

By 6 April, I was desperate to find Ziggy as the weather was turning colder and I couldn’t handle knowing he was out in the cold, alone.

I contacted an animal communicator. She explained that she saw Ziggy and that he was safe, uninjured, and was being kept in an informal settlement (shacks and tin roofs where they cook over fire) a few kilometres from where he went missing. He was fed (bits and pieces) and looked after but wanted to come home as much as we wanted him back. She saw him being taken to the beach near showers – something about “skoon” kept coming up. She said there was a man whom he stayed with who had him on a rope/string but he trusted the man and there were children around that played with him.

That morning I headed out and, with the very helpful Strandfontein police, handed out flyers at the informal settlements on Baden Powell Drive Strandfontein/Mitchell’s Plain. By this stage I was so sick of people contacting me about the reward despite being unable to produce any proof that they actually had my dog.

I knew he was out there and I refused to listen when people said it was time to move on. I understood that it had already been 12 weeks but could not and would not accept that he was gone. I prayed every night, asking God to keep him safe and to give me the strength to find him. Sheree Steenkamp and Karen Ellis Brown (two amazing people who are part of the lost pet networks in the area and both dedicated to helping reunite lost pets and save as many animals as possible) were fantastic in keeping my hopes up that Ziggy would be found, with both of them following leads, sending advice and offering support.

On 14 April, I was sent contact details of another animal communicator who sent me the following: “Row of leafy trees, open field with buildings behind it, wooden planks (could be a fence), large round cement pipes, gravel roads nearby”.

I spent the next two days driving up and down, looking for an area that would match this description while keeping the other communicator’s description in mind too.

On 25 April 2018, Marilyn Hoole from TEARS called me at 16h10 to say she was within sight of a dog that looked just like Ziggy. She sent me a photo and, although it was similar, I was unsure – it looked so different and, with all the false leads from that area leading to the dog that lives on Boyes Drive, I wasn’t sure I was up for another false hope. But Marilyn went to check if that dog was home, phoning back to say that it was at its house, where it belonged.

Could this really be Ziggy?

I headed out to meet her, following her to just past the St James tennis courts. We couldn’t see anything so we clambered through the railing to get a better look. After whistling a few times, a black-and-tan dog with white paws came cautiously out of the bushes. I knew it was my Ziggy. But before I could blink, he ran back into the bushes.

I’d read all the articles about what to do when you find a missing dog (don’t chase it, wait for it to come to you, etc., etc.), but the minute I laid eyes on my baby, all that information went right out of my head. All I wanted was to have him in my arms.

I edged closer. Still unsure how to get in, I tried a few times to edge even closer. I knelt down and pushed my hand through the prickly bushes to get a better look – and there he was. Not even a minute later he was coming closer. Then he licked my fingers before jumping into my arms. Best feeling ever!

I held him close and he licked my face – I felt like I would never be prepared to let him go. Ziggy had grown a little and his fur was longer and thicker (winter coat grown in). Visiting my vet confirmed that he even though he’d lost 0.5 kg, he was perfectly healthy and had no injuries at all.

We never gave up on each other

Ziggy settled back in at home as if he’d never been missing. 15 long weeks, 104 miserable days and he was finally home! The best part was that it was like he’d just been waiting for me to come and get him. So, just like I never gave up on him, he never gave up on me.

And now he even has a new friend: Princess. She’s bonded with Ziggy as well, so, at this stage, I’m keeping her. I’d love to keep her permanently, but we’re taking it day by day – three dogs and three cats can get a bit hectic!

I’m unbelievably grateful to everyone who shared his posts, as without all the sharing he wouldn’t be home. For those out there who have a pet missing, believing they are coming home is half the battle. Keep believing and don’t give up. I kept the faith and now I get to cuddle on the couch with my baby, safe and sound. And for friends and family of those with missing pets, please let them have their hope of finding their missing pet. 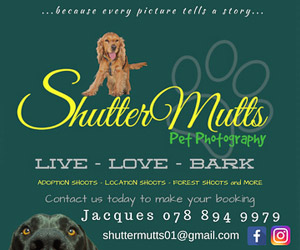