Affectionately known as HoneyB (aka Honeyball), this handsome tri-coloured dog arrived at KAWS (Kleinmond Animal Welfare Society) six years ago after being tied up on a short chain and teased and abused by humans for three years.

He was a broken dog; scared, angry and unsure of the world and humans. KAWS set out to make a difference in this boy’s life.

After much love and caring, many walks on the beach and lagoon, and mountain hikes by KAWS volunteers, he was a happier doggy, but, sadly, one who always got overlooked for “cuter” dogs.

One day, when popping in to say “hi”, I noticed that HoneyB was taking strain; he looked desperate and sad. I went home in tears: I had to do something.

Why is he left behind?

I took to my private Facebook page and posted a plea for help:

“I popped in at KAWS now to say hi and see the dogs. I haven’t seen Honeyball for over six months and he has been at KAWS for over six years.

“I left with a tear in my eye and a very heavy heart. His eyes are so sad and he is withdrawn and quiet. Six years in a shelter is just not on! Why is he left behind? He is amazing! My wish for 2018 is that Honeyball finds his forever love and home.”

Sharing made the difference

My plea was shared by a special friend, Caron Stocks Upton, who’d also had the pleasure of meeting HoneyB; the post then caught the eye of Joy Sachs in Plettenberg Bay.

The KAWS team is very strict about their adoption process; after evaluating Joy’s application, it was clear she was perfect for HoneyB. Many tears were shed at this good fortune and in the knowledge that beloved HoneyB was going to have a real shot at a family and an amazing retirement.

KAWS staff and HoneyB’s supporters arranged a farewell for him the day before he left for Plett and, in true HoneyB style, he even managed to raise over R600 as a farewell for his fur friends. Honey was groomed and spent his last night in the welfare before heading off to his new life.

Early on Saturday morning (2018), Tracey and Riekie placed him into the sponsored bakkie and left for the long journey to #gethoneyballhome.

At this point it must be mentioned that we’d needed to raise funds to make this trip possible. After a plea on Facebook, so many people jumped up to the rescue that funding was soon secured. KAWS thanks every single person who supported these efforts.

There’s one person in particular who needs to be mentioned, purely due to the surrounding story. John Froneman from Durbanville donated over R2,000 as a lesson for his son to learn: he wanted to illustrate that for the cost of a new pair of designer sunglasses, you could alter a dog’s entire life so dramatically.

After losing two elderly adopted fur babies some years ago and swearing “never again”, last year I slowly began to take notice of dogs for adoption.

My only criterion was that they be senior dogs, as they stand very little chance of adoption when competing with all the thousands of cute and cuddly puppies out there (and being a senior myself, it made sense).

I called some local animal welfare groups and responded to some Facebook pleas, but they never even called back, which I found startling.

The moment I saw the picture of dear Honeyball (as he was then called – I call him HoneyB), his shining, intelligent and loving eyes just called to me. I messaged Caron who messaged right back to say that Tracey was the person to contact. I immediately called her, left a message and, as there was a reply, I called her the next day, Sunday.

I was asked for photos of my home and yard (I live in Plettenberg Bay) by Riekie at KAWS and was sent the adoption application to complete. To my surprise and delight, I received the phone call to say: “You are successful!”.

From then, it was decided that KAWS would personally deliver HoneyB to Plett and so many wonderful wheels were set in motion.

The arrival of HoneyB

The following Saturday, after a long drive in a bakkie rented specially for the purpose of chauffeuring HoneyB (thank you John F, again), Tracey, Riekie and HoneyB arrived. The boy, in the flesh, didn’t disappoint. In fact, I fell in love with him instantly.

It was a hugely emotional experience for us all and HoneyB seemed to just slot in immediately.

Adjusting to living in a domestic environment, eating different food and learning basic skills (like how a door opens, what a telephone ring is, what a soft and cuddly bed and blanket of his own in a bedroom means, learning to sit before food and treats are given, etc.) has been an interesting process for us both.

Initially, I opted to bring him to work; all the customers at Wool&more were enthralled by having his loving, friendly presence here. The courier delivery guys were not as impressed and most just left the parcels outside the security gate! However, HoneyB became very protective of me and got somewhat carried away with a visiting gentleman, so we were advised that it wasn’t a good idea to keep him at the shop.

So, he stays at home during the day with treats and Kong balls with goodies to keep him busy.

Some challenges have emerged, such as his propensity to discover what is on the other side of the garden wall and having a strong urge to protect me from other folk when we’re out walking, but we are dealing with these in the best possible way.

We have a large “garden within a garden” that is fenced off to keep him safe whilst I’m at work – interestingly, he seems to love the more confined space it provides. When the gate to the rest of the garden is open for us to come and go, he gravitates to “his” area every time. Maybe it reminds him of being safely confined at KAWS.

It’s so inspiring to see how he learns new things daily and how he just loves every moment of life. Old habits die hard, though – he still keeps “shelter hours”: he wants his breakfast at around 06h30, dinner at 16h30 and holds his bladder until we go out for our morning walk.

HoneyB has changed my life beyond how words can describe – he exudes so much love and trust in me… and it’s a mutual scenario. We’ll be seeing a professional trainer soon to assist with his over-protective ways and to get him to walk a little more gently on the leash – currently, he who pulls me along in his amazing love of life and pure exuberance.

It feels as though we have BOTH found our soulmates – I will forever be grateful to KAWS and their wonderful volunteers for looking after him so well until I came along to take over as his forever mum.

Thank you, again, to all who made this incredible adoption such a success. Gratitude overflows.

Watch the video that KAWS made for Joy before she met him… http://studio.stupeflix.com/v/jd1FBv2GTV8b/?autoplay=1 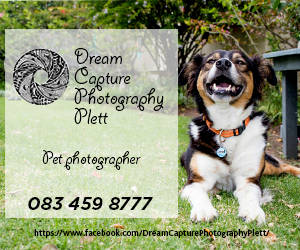